Do you remember the razzle dazzle camouflage of WW1?

Do you remember the razzle dazzle camouflage of WW1? 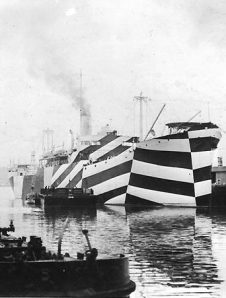 USS Mahomet in port, circa November 1918 [Official US Government photograph used by Wikipedia (http://en.wikipedia.org/wiki/File:USS_West_Mahomet_(ID-3681)_cropped.jpg – January 2013)
I remember the mixture of delight and bafflement when I first saw images like this (is it the bow of one ship?) and paintings such as Edward Wadsworth “Painting of Dazzle-ships in Drydock at Liverpool” (1919) (http://en.wikipedia.org/wiki/File:Dazzle-ships_in_Drydock_at_Liverpool.jpg ). Forty plus years later I found the proposal plans held by Rhode Island’s School of Design (http://dazzle.risd.edu  ) and the mix of theory/history/experience within Tim Newark’s “Camouflage” (2009). (Published by: Thames and Hudson in association with the Imperial War Museum and with a Jonathan Miller introduction).
However, I did not realize, until today, that similar schemes are used to distort concept cars undergoing proving road trials. This is, apparently, the Cadillac ELR plug-in hybrid;  ahead of a “launch” January’s Detroit Car Show? (Multiple web sources) 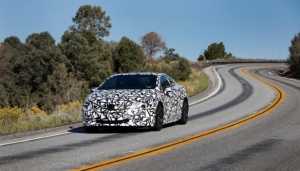 This entry was posted in Miscellaneous, Random but interesting, Serendipity, Smilers, Technology (& Science). Bookmark the permalink.
%d bloggers like this: